Tell us about life with your BX, or indeed life in general!
Messages: 391

I had to move the BX, it's below freezing and the car is likewise quite cold. Am I going to experience the eternal churn of disappointment? Nope! Double cycle of the glowplugs, a little bit of throttle to help it along and boom, car started more willingly than it has on milder days since the problem appeared. Perhaps it wasn't coincidental with that cold air intake pipe then.
Top

This might sound daft but could the cold air pipe have been touching something and causing the fault? Does it run anywhere near the glow plug wiring for instance.

Not that I could see. There's nothing wrong with it and the route it takes doesn't interact with anything electrical so I have literally no idea why it would cause any effect at all. I suppose that until I figure it out it just means I have induction drone in the winter. A new air filter might help, though the one fitted doesn't look particularly ruined.
Top

It is more likely that re-doing the glo-plug connections has improved things.
Top

Ah, yes, I thought that too, but if you put the pipe on the car won't start happily and that's without me doing anything to the glowplug connections. Remove the pipe, all is good again. The pipe is the only thing that seems to make any difference.
Top

Small progress update on the BX. I had to put the cold air pipe back on, it was just unbearable with it off. I found that if I used half throttle when I started the car, it counteracted the issue the pipe was causing. Today, the hose I ordered arrived so we could do a bubble check. 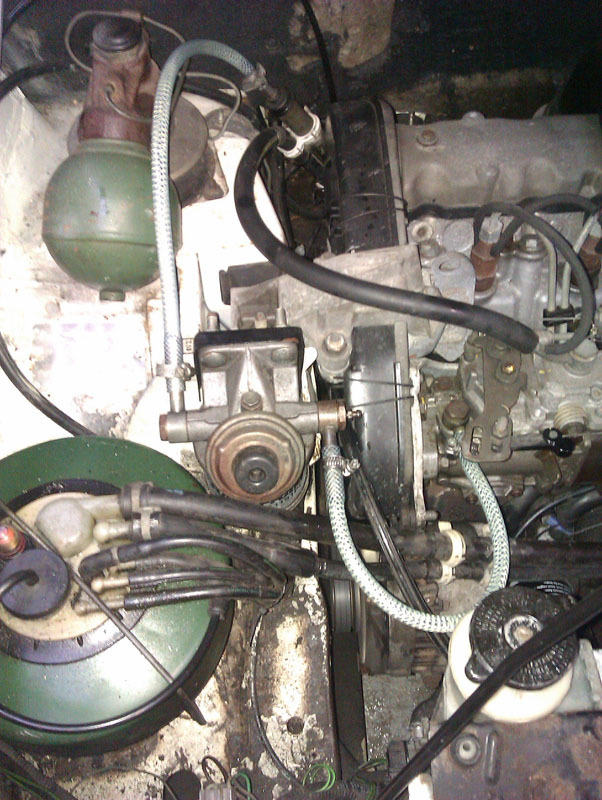 Upshot of this is there appears to be no bubbles. The car also seemed to start more willingly so perhaps the hoses that were on had unseen issues. If this doesn't sort it, I've been offered loan of a spill tester to find out if it's an injector issue. I'll give it another check and inspection tomorrow when it's stone cold so we can see if bubbles appear when the car is cold since I could only test it when hot today.
Top

Today, still no bubbles in the fuel and the car started so easily it caught me off guard. I was expecting to crank for a while so I could watch for bubbles and instead the car just started with no bother, no double-glowplugs, no throttle application.

So... fixed? Maybe the rubber hoses had gone porous or something, there wasn't anything obviously amiss with either of them but perhaps there was some damage I just couldn't see with the naked eye.
Top

The starting problem has come back, but not as badly, so injector spill test is next, when I get chance.

The only other issue is the water ingress. I did another round of sealing potential points on the outside of the inner arch and that hasn't cured it. I know it's coming in from the outside of the car and I know it's not coming in through the inner arch, so it's probably coming in under the washer bottle. Or it's coming in through the roof rails, down the A-pillar, and then appearing at the first point it can find to get into the car. It's proving difficult to locate because all the areas on the outside of where the water appears inside the car can be dry and the water will still get in. I know it's not screenwash or coolant, it's definitely fresh water runoff that's coming in, and it's barely even a dribble so without the carpet in the driver's footwell it dries out really fast.

I've also got mystery water ingress in the boot. I've been getting a damp spot in the middle of the carpet in the boot, and I can't figure that one out at all since there's no holes or rust or drain points or anything there that would cause it. Other times the driver's side storage cubby carpet is damp, but only as damp as a well wringed out dishcloth. If I hose the rear arches and the windows and such no water leaks through so I don't think it's a seam that's gone, it's just like the water *appears*. Dries out very quickly too, so by the time you've actually investigated it, the moisture is usually gone.

I hate when you can see the symptoms and not locate the cause.
Top

Could the damp in the boot be condensation dripping down from the rear screen?

Any holes behind the rear number plate or the tailblazer left unfilled ?
The Joy of BX with just one Citroën to my name now. Will I sing Bye Bye to my GTI or will it be Till death us do part.
Top

Panky: if it were, I'd expect the parcel shelf to catch it, and it doesn't. In fact, the parcel shelf remains bone dry top and bottom. The rear screen does get a lot of condensation on it, far more than you'd really expect since the car isn't constantly damp, so I'm really not sure what the cause is. Perhaps the tailgate seal isn't quite what it should be?

Jaba: nope, all holes filled, for this very reason.
Top

In that case you might have to take the carpet and panels out to see where it is coming from. Maybe the lock ?
The Joy of BX with just one Citroën to my name now. Will I sing Bye Bye to my GTI or will it be Till death us do part.
Top

That's the thing, I've had the carpets and panels out and the water then doesn't appear. Also, where the water appears in the boot, there's no moisture trail to where it might have come from. It literally just *appears* with no obvious sign of how. If it's condensation dripping from the underside of the parcel shelf, for instance, one would expect the parcel shelf to be wet, but it never is. If it's leaking in from the inner wheel arch you'd expect the seams in that area to be wet, but they never are. It's also not related to how much rain there has been, and doesn't appear if I wash the car. It's one of those weird things where sometimes it's just damp for some reason in incredibly localised and specific spots and I can't figure out how.

Similarly, the other day there were literally two spots of water on the passenger floor mat with no sign of where they might have come from with all the surrounding trims dry and free of water staining and no condensation on the windscreen.

Even more bizarrely, we had a lot of rain last night and the car was bone dry inside with nothing coming in to the driver's side footwell like there normally would be, and the car is parked in exactly the same place and exactly the same way as it was last time water got in.

I do wonder if perhaps the problem isn't water getting in, but water that's already in unable to get out, and it's the cycle of condensation that's making the moisture in the car collect in weird places and then randomly *appear* with no obvious sign of ingress. The Princess has a similar issue, in part because of the ancient windscreen seal that has started to go porous, but also because it's sat idle outdoors and the BX, just like the Princess, dries out very nicely on a run and doesn't fog up again until it's been sat in the weather for a few days.

Realistically, I'm being fussy. It's down to knowing just how much hidden havoc on the bodywork can be wrought with even very tiny unchecked water leaks and me not wanting to be faced with a weldathon on a car I really rather like.

Oh and today, after several days of easy starting, the BX was really incredibly reluctant to start every single time I tried with no discernible cause, tomorrow it will likely go back to being normal again.
Top

On the 21st of December, the BX and I undertook the 300 mile drive down to the new house in Kent. It was a surprisingly uneventful trip, with the BX even choosing to start with absolutely no drama on a somewhat chilly morning. Smooth running roads and surprisingly clement weather for the entire run meant progress was steady up until about the last 50 miles when the weather changed, becoming intermittently foggy and rainy. Arriving at the new house I felt a little tired from the long drive but not uncomfortable and we quickly set to unloading the car to get the more fragile things in the house.

Internet was connected today, the 2nd of January, and in the last two weeks or so, the BX has got rid of its starting difficulties for no obvious reason. I assume the long run helped clear things through because since arriving here, the car has only exhibited the starting difficulty once so I'm not entirely sure what the issue is there.

It turns out that when I had time to investigate it, the rear reflective panel was indeed filling up with water. The foam sheet I used wasn't the problem, the problem turned out to be that I hadn't put any drain holes in so the panel would fill up until it found a way out through the screw holes that hold it to the tailgate. After tipping out the rainwater, I added three drainholes in the bottom of the foam and now it doesn't fill up with water and the rear screen thus far has stayed clear of condensation.

At the front, the water ingress into the driver's footwell looked to be caused by a blanking plug on the inner wing behind the washer bottle. I removed what loose sealant I could, cleaned it up as best I was able, and resealed it all. So far, the footwell has stayed dry even after a night's rain so I'm hopeful that this is cured and I'll soon be able to reinstall the carpet again.

Last thing of note is the MoT that's due at the end of this month. I've got a useful shortlist of garages to try out locally so hopefully we'll get through that with minimal fuss. Certainly, I'm not expecting any drama, the car is in better shape now than at its last MoT and I've barely really done any miles since then. This also marks just about 1 year of ownership, which has flown by, this car has been, and continues to be, a joy to own.
Top

What a feelgood story with a happy ending too. Happy BXnew year!
The Joy of BX with just one Citroën to my name now. Will I sing Bye Bye to my GTI or will it be Till death us do part.
Top
Messages: 391